Of all form submissions are from those built by customers

Forms built by councils submitted by citizens in the current year

Do you want access to a 'Council in a Box', with a library of over 1000 forms?
‍
IEG4’s customers are sharing and utilising forms built in-house by councils without code. The forms cover the simplest of council-provided services through to the most complex ones.

Content within the online forms can be edited using the built-in text editor. This means that question wording, guidance notes and help text will be editable by individual councils to suit their own needs. This includes the ability to support additional languages e.g. Welsh.

Services/forms are continuously being added to the LGaaP store by customers using the eDesigner module and any of the forms in the library can be added to/manipulated with eDesigner. Forms cover all departments. Here are some examples:
‍

A Council in a Box

Not only do all councils do the same things, more or less, but it is also true that all departments in all councils do those same things. In any one council, there may be dozens of departments, and there are hundreds of local authorities. And they may be all doing things slightly differently, all with their own systems and software – an approach which might, if we were being kind, be described as, at the very least, inefficient.

Back in 2015, the director of the London Office of Technology & Innovation (LOTI) Eddie Copeland, then working for the Policy Exchange, imagined a scenario where local authorities would no longer design and/or buy their own online services – because those software services were essentially doing the same ‘things’ (see above) as in every other local authority. Instead, software services would be available in an ‘app store’, having been created by different organisations, and would be used by ‘dozens or even hundreds’, of local authorities.

This would, because of economies of scale, be more efficient (i.e. cost-effective, saving councils money). The ‘store’ Copeland described is available now from IEG4. Using a number of different technologies, IEG4 has formulated the concept of Local Government as a Platform, or LGaaP for short, which is essentially enabling local authorities to create ‘apps’ which they can share with other organisations and to pick and choose ‘apps’ which other organisations have created.

Our approach is that, whilst councils do like to do things their own way, which means there is, inevitably, some reinvention of the wheel going on – it is also true that more and more councils are happy to share. And through IEG4u, IEG4’s customer portal, they are able to make forms they’ve built for ‘things’ (see above) available for other councils to see, and share.

Additionally, IEG4’s own free library of forms numbers around 100, which is also available to all customers on the portal. This means that, from day one, users have access to a library of in excess of 1000 forms. So, this really is a ‘Council in a box’, and represents an opportunity for local authorities to make a step change forward with their digital strategies, wherever they are in the journey. This may be to get started on a coherent digital strategy, or to pull a number of disparate departmental approaches together.

Because not only do councils get access to the forms, but also the forms share the same coherence, the same look and feel – making it easier for citizens accessing the council to recognise and navigate through a form. And if citizens find it easier to use online services, then channel shift, digital transformation, really does happen.

We have developed key digital transformation technology platforms to assist you through your journey.

eDesigner allows non-IT staff to develop and deploy electronic forms and service requests from citizens, with no coding necessary. The same staff can set up workflows to deal with these service requests, allocate workloads and provide functions and facilities to interact with citizens.

eGovHub is the IEG4 platform for managing electronic webforms deployment through a browser on a mobile, tablet or PC device.  eGovHub manages shared council settings such as style sheets etc but also allows each form to be deployed with multi-lingual capabilities.

OneVu API framework sits behind OneVu and several of our other products such as iSpeakRevs&Bens. Through secure authentication it brings together data about a citizen, in real-time, that is normally 'trapped' in legacy silos. This allows non-IT staff to surface this data to citizens and other systems.

Until recently, there were very few examples of standards one could use in central government let alone local government. This makes being good at integrating to different systems with different mechanisms an increasingly important skill set, as government seeks to rationalise systems and optimise service transformation.
‍
This lack of standards and commoditisation of functions shouldn’t exist in 2020 and to be fair central government has, over the past few years, made some great headway in this area with the introduction of standard-based services. In particular GOV.UK Pay and Notify.

These services recognise that in many service areas and use cases of government people might need to pay for something and be notified of something. Historically, in central government, each department would pay different software suppliers for different versions of systems that made taking payments and sending notifications possible.

Not taking advantage of their scale to procure smarter, and more importantly, not standardising any of these mechanisms across departments is inefficient. Roll down to local government level and virtually every council >300 will have different solutions for taking payments and sending notifications out to people.  Indeed the issuing of notifications is probably done via multiple systems in a council.
‍
So the reason why GOV.UK PAY and NOTIFY are so important is they :
‍
- Are free / very low cost compared to the alternatives
- Use the very best practice in terms of API design
- Enable a council to potentially deliver all of its notifications via a common method and enable more communication via alternative channels like SMS instead of paying every back office supplier to do this
- Are going to be enhanced for free with cool stuff like being able to pay with Apple Pay
‍
To provide some insight into how useful they are and how GaaP services are providing LGaaP, we have recently built integration with these services into two of our products: eDesigner and our Digital Blue Badge Platform.

eDesigner enables councils / organisations to build mobile-responsive online forms for any purpose in a consistent manner without code. In the past we’ve built cool no code integration into eDesigner that enables a non-technical user to build an online service to take payments.

But we’ve had to build this separately for every different payment system our customers use with totally different APIs and mechanisms involved. Since June 2019, we have provided our users with a free upgrade that enables them to integrate directly with the GOV.UK Pay service with no code. Have a look below where you can see an example of a form built by a customer services officer fully integrated into GOV.UK Pay:

As a part of enabling Local Government as Platform, eDesigner now enables every service request to have a consistent model to collect payments and IT are not required to assist with its implementation.

Our Blue Badge Platform goes even further integrating to both the GOV.UK PAY and NOTIFY services.

As a user’s application is progressed, real-time and template driven notifications are sent via the GOV.UK NOTIFY service to the customer based upon the preference they set when applying. Where the customer has yet to make a payment, they are automatically notified using GOV.UK NOTIFY and when they make the payment in our novel self-serve function they do so using the GOV.UK PAY service.
‍
It might not seem like it but standardisation drives innovation.

It would be much less likely for a software company (like us) to offer the intelligent status updates and payment functions in the Blue Badge platform if we had to integrate to ten systems across different councils. Having standards mean the best ideas win and is something we should strive for. 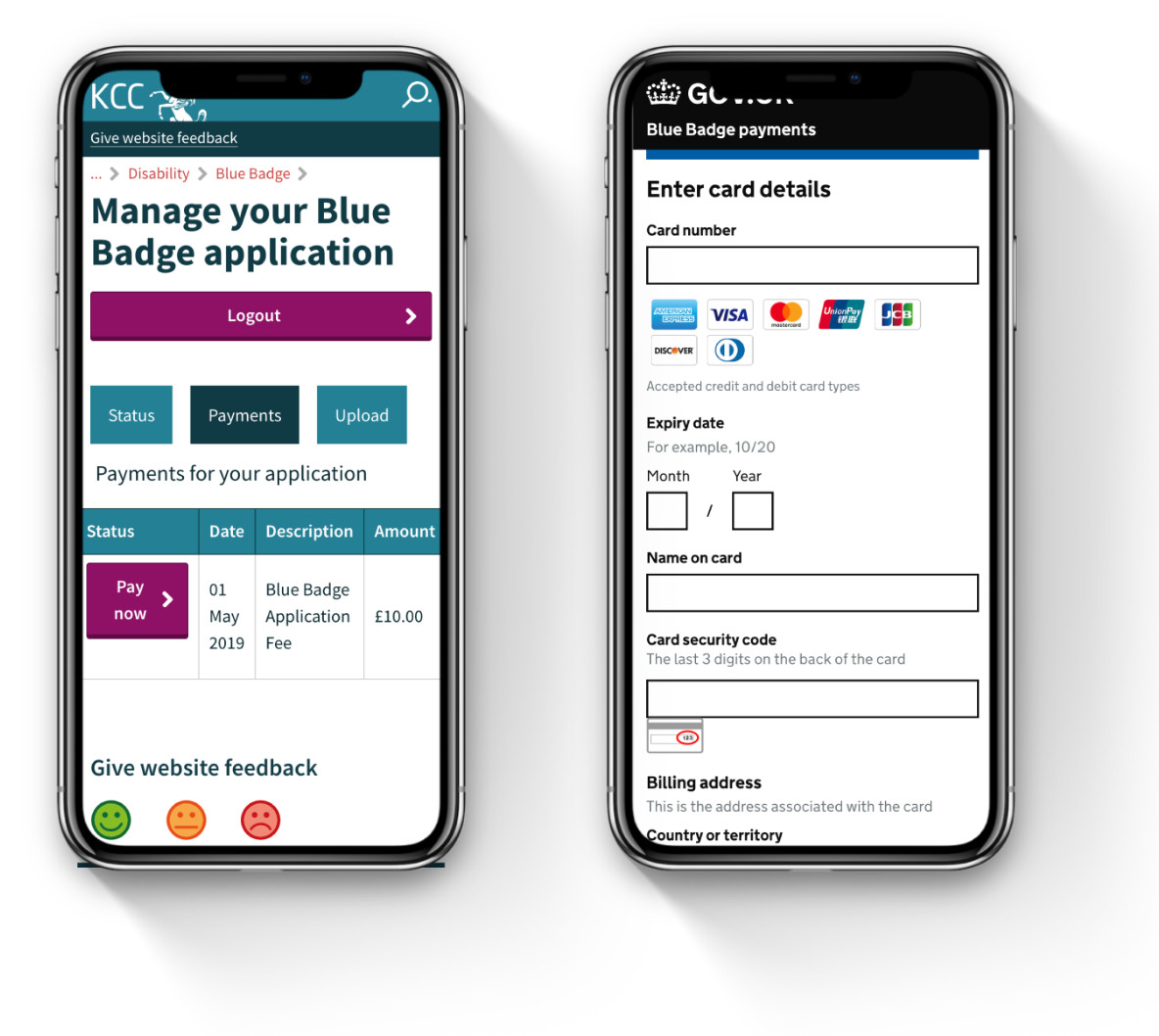 During one of our bi-annual product-focussed hackathons, one of the things that was heavily requested by users was the ability for citizens to report issues on a map. Indeed, by the end of the day we had a prototype created.

As they say, location matters and we felt this was an important function to add to eDesigner as a part of the personalisation strategy we have in our digital services. That is to say, the new Map functionality within eDesigner is very cool but is just one element of our strategy to provide personalisation around a user’s location.
‍
In our quest to provide common functions irrespective of service, we have now provided a function to enable non-technical users to embed a map into an online form and a common way to allow citizens reporting issues to:

We particularly like the fact that using street view a user can find a very specific location by viewing the map and then set the location. We also see potential for Augmented Reality use cases in the future for this.

By leveraging the powerful Bing Maps API a citizen can technically find a location anywhere in the world in seconds with minimal data. Moreover Bing Maps is also smart enough to filter search results to those near to the user’s location if they’ve previously enabled geo-location.

This is very powerful.

Providing a user with no coding skills and the ability to achieve tasks that only a developer would previously have been able to complete is a powerful part of enabling Local Government as a Platform. eDesigner now allows every service request to have a consistent model to collect geolocation data without requiring the assistance of IT with its implementation.
‍
It just works.

IEG4's strap line is 'We do tricky'. But in this case we are taking the supposedly complex, removing the technical gobbledegook to enable business users to do their jobs better in a consistent pan-council manner.

After all, isn't that what software should be - an enabler?

We regularly run webinars so you can get see our services in action.

If you'd like to join a webinar or speak to a member of the team, you can get in touch here: